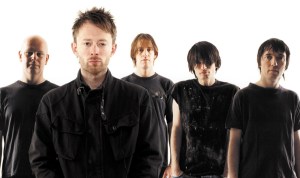 These guys basically have a mortgage on cool. Thom Yorke’s haunting voice is a dish I never tire of consuming. From the very start, they were a bunch of guys that really didn’t seem to care about fitting in which is always a drawcard for me. Even the way they ran the business side of their careers was a thumb up to everything that everyone else was doing. When they announced in 2007 that their album “In Rainbows” was going to be released through their website for free download and you could pay what you thought it was worth, I wasn’t surprised, that’s Radiohead. Brave. Brilliant. Other, mainstream artists tried to get on the train and do the same thing but with little gotchas so you couldn’t really get the full product without paying which was just utterly pathetic to watch and so predictable. It only made Radiohead look even better. They have in recent times almost completely abandoned the traditional drum and bass backing for dry, electronic percussive sounds and they pull it off amazingly well. Favourite song – “Fake plastic trees”.